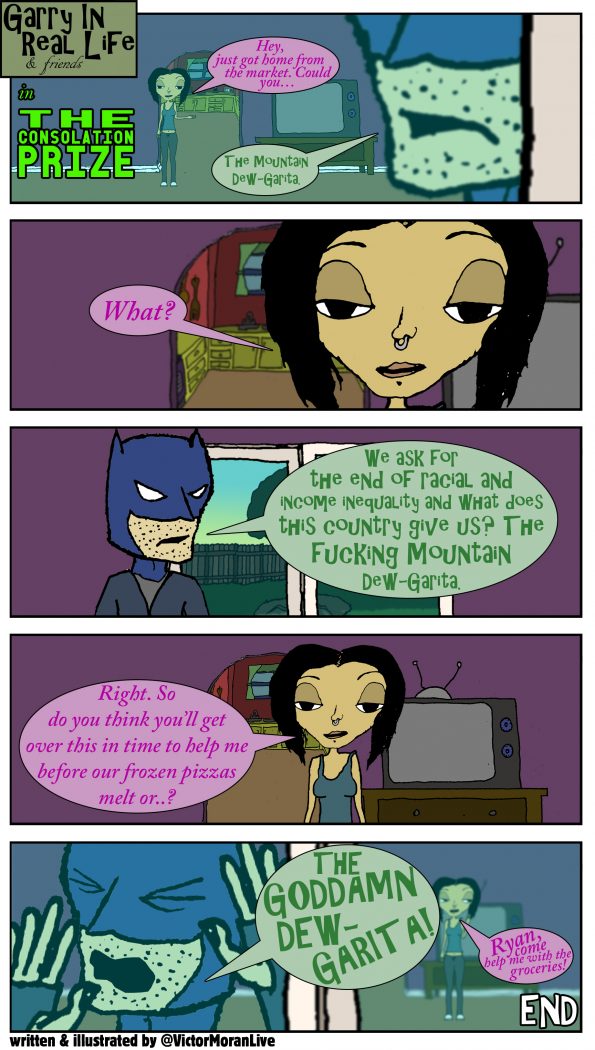 Welcome to The Pre-Game, the previously unheard portion of This Will Not Be Helpful that is NOW a monthly companion video on Youtube. I know, it’s crazy and this month Erik finds out there’s a new Batman movie by watching The Batman trailer in this reaction/discussion video. So be helpful later ’cause it’s time for the pre-game.

New to This WIll Not Be Helpful?

Podcast Synopsis: This Will Not Be Helpful is an informative podcast with very little information where hosts Erik Chavez and Victor Moran go over some of the week’s news, tackle a chosen topic in depth and answer YOUR sent in questions without the aid of google.

Have you heard our Clip Shows? 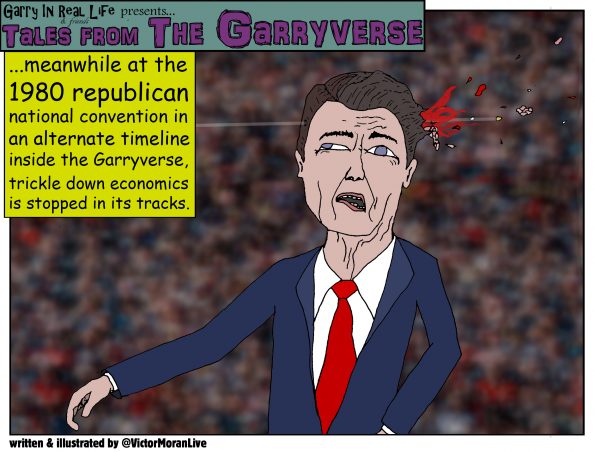 And so Rickles’ head sat for months on the butt of my drill, whenever I wasn’t using it of course. Proudly displayed overlooking my desk. Forced to watch me slave over the very work that left him a glorified trophy with his unmade body in a box underneath my desk. I have an immense guilt over it, you can tell but in my defense, I had deadlines to meet and the body required foam that I did not have. Eventually, around July of 2019, after seeing those big eyes stare at me day in and day out, work died down a bit and I got around to getting a roll of one inch thick project foam. Rickles specifically used the word prominent when describing his belly and so I figured a full inch would give it the structure required. 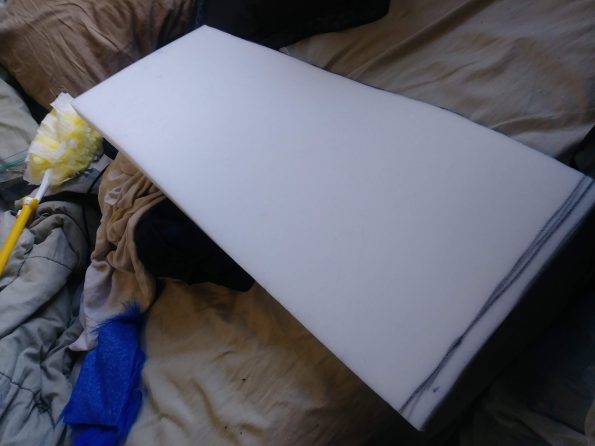 So I rolled out the project foam and marked out the height I felt Rickles’ belly should be and gave myself some extra material length wise because I wasn’t actually sure just how round it should be. I cut out the rectangular shape and began making it into a tube to figure how much the belly was going to stick out and after finding the right amount I cut off the excess and glued the two ends together. Now, I used crazy glue and I’m aware there are better glues to use like silicon sprays and any upholstery glue really but I had crazy glue and it did the trick SO take from that what you will. After the glue dried I measured out four even points of both ends of the tube, marked them and cut out two inch deep triangular chunks from the marked areas. The idea being that once done you can glue the open triangles to themselves causing the tube to become rounded on the ends, giving the effect of a belly. Easy right? 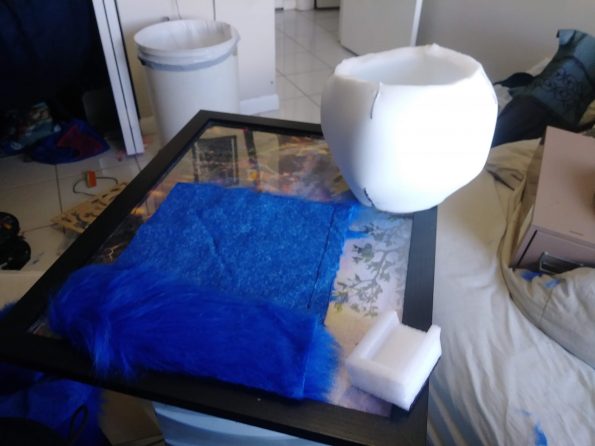 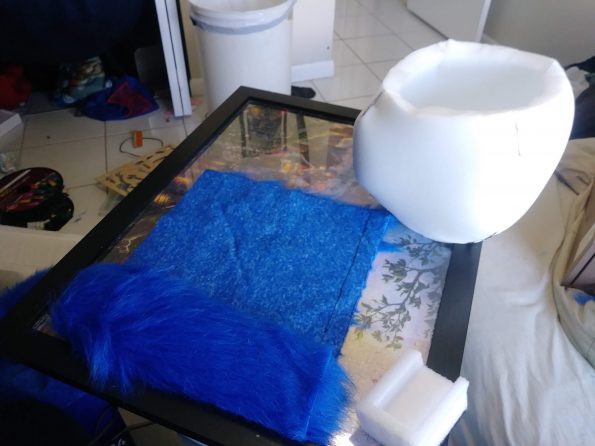 Easy my ass. This took two days and three attempts to get it right. These are pictures of the first crack at it. See that weird, some would say suggestive bulge on the end? See how one end is clearly tapered more than the other? It was a fucking horror show and the second attempt wasn’t any better. Honestly I couldn’t even look Rickles in the face and due to my massive fuck up there was really nowhere else to look at him. 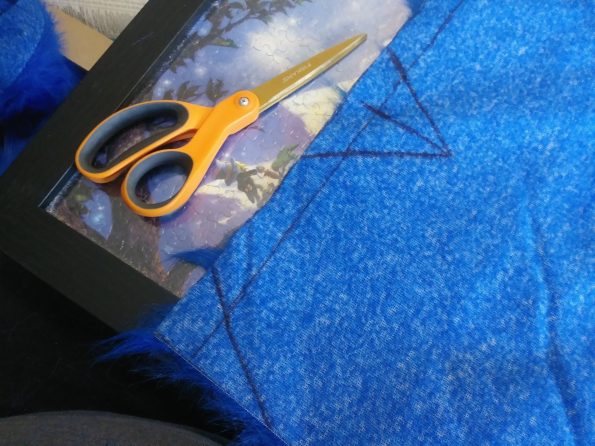 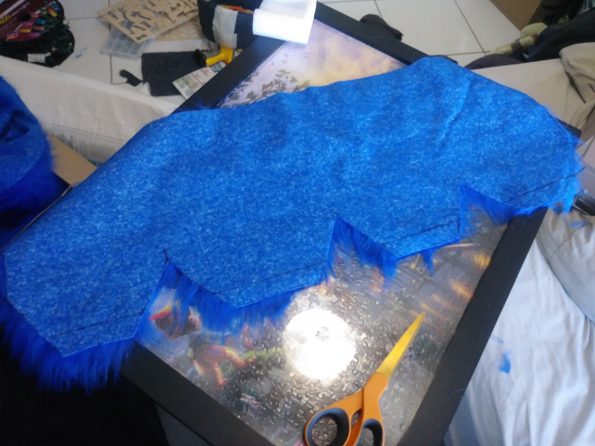 Where I went wrong was the triangular cut. Let’s be real here, I’m still a rookie when it comes to puppet design and building so I have no shame in saying I eyeballed the triangles on the first two attempts. THERE, I said it. I was feeling myself after the achievement of the head and got bit in the ass. DON’T EYEBALL YOUR CUTS. See at the end of the day you’re attempting to make a shape here so like it or not, you gotta use a little math and I know for a lot of us creative types that’s the word of death but trust me when you’re two attempts of materials in the hole you start cuddling up to math quick. 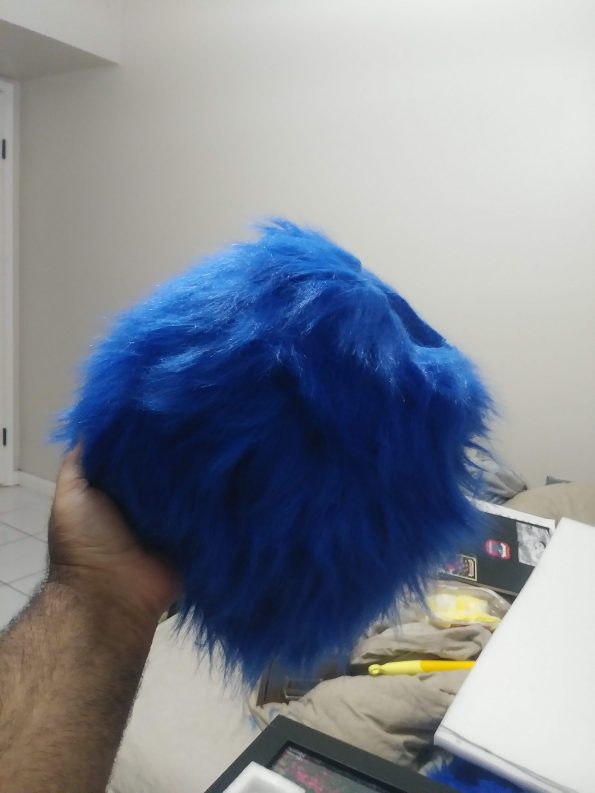 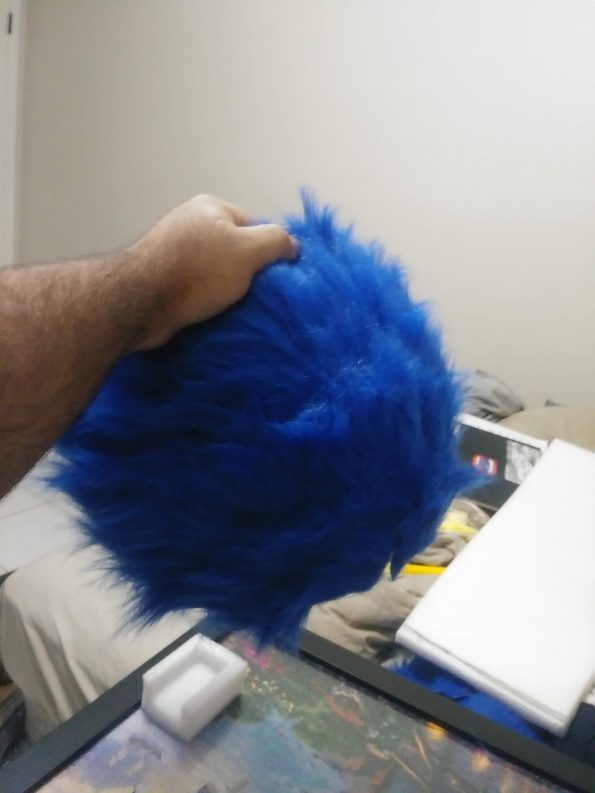 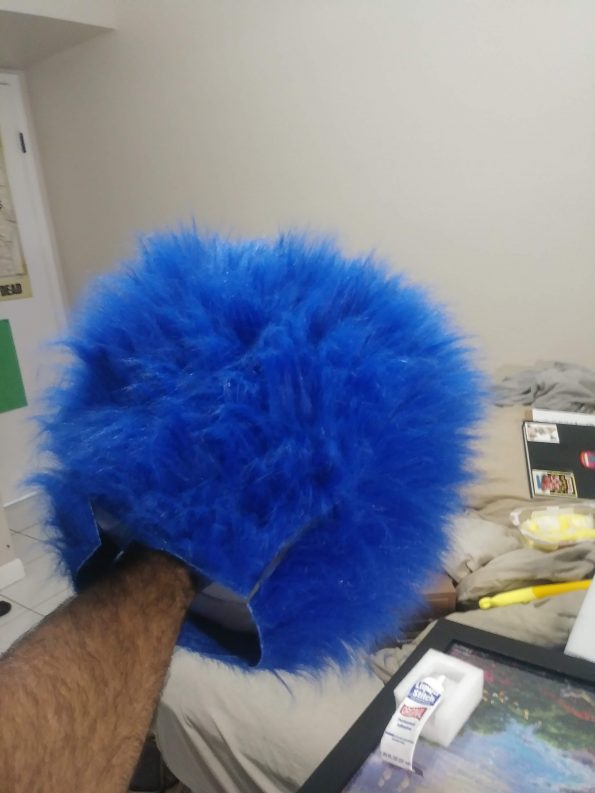 After two days of structure attempts and a third day furrifying the belly, yeah furrifying fight me, I was in desperate need of a break from puppet work. Sure, it wasn’t much but it was a step closer and Rickles was so happy that it would surely be enough to keep him calm for a bit as I shortly would be hard at work with the year’s new holiday programming and the upcoming 2020 lineup. All new work with all new deadlines that would have to be met. Lucky for Rickles the whole world was about to come to a screeching halt within the next 8 months. 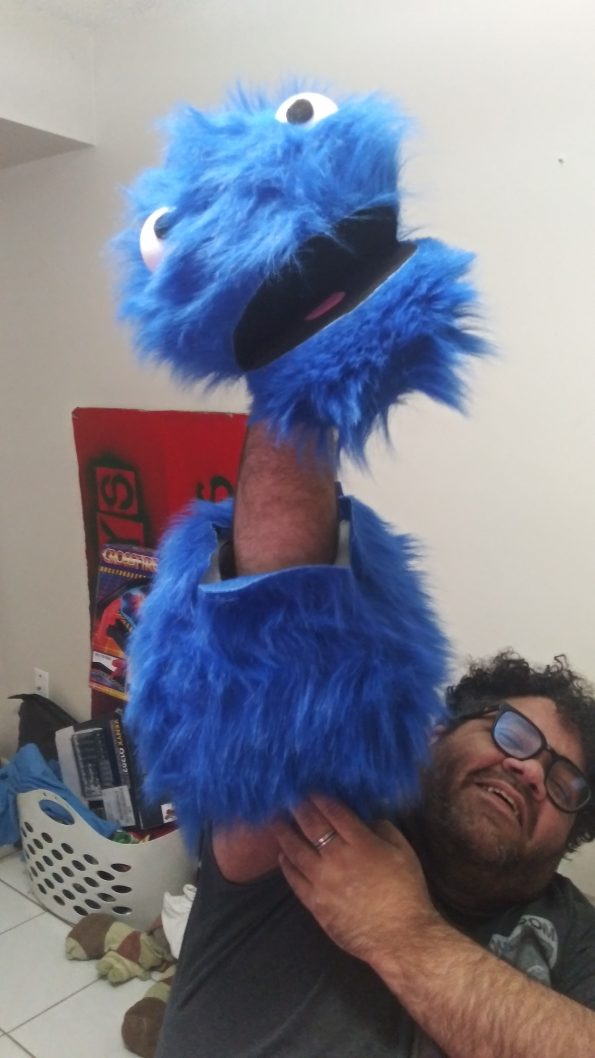 It’s May 16th 2020 and the COVID19 quarantine is in full effect. Jocote Jams and The Soundtrack are on the home stretch of their first seasons, This Will Not Be Helpful is being recorded through zoom and my son is wondering why I’m acting like it’s not my birthday tomorrow. The stress of everything happening in the world is getting to me and my son is smart enough to realize it. He snaps me out by asking, “Where’s Rickles?” He had been getting dusty and so I put him in the box with his belly and rest of his unassembled body. Where’s Rickles… that’s all it took. 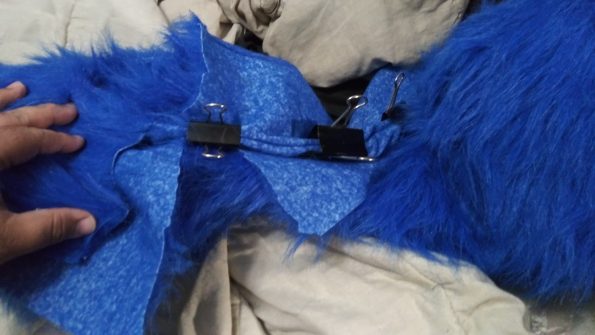 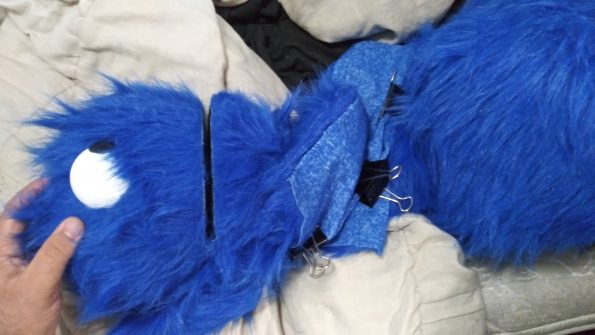 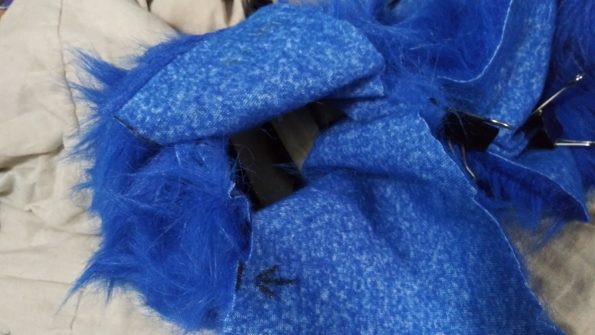 Within minutes I had pulled out Rickles and his parts. I used the circumference of the belly to gauge how much fur I’d need for the width of the torso and my forearm for the height. I then used liquid stitch glue to attach the bottom completely around the belly and the top to the jawline of Rickles’ head before pinning the spine together in a cone shape all the way down to the belly. I figured that the cone would give an illusion of a neck and shoulders without having to come up with an intricate interior structure and cuts. 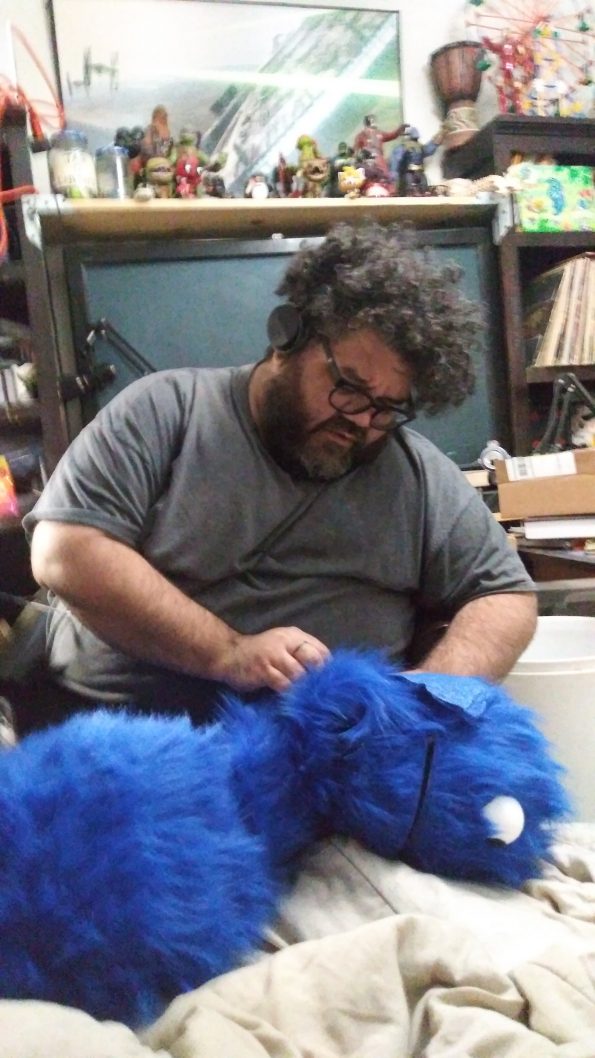 Once the liquid stitch glue dried I cut off all the excess fur from the cone to make the next step easier. See, I figured I was gonna have to stitch this thing together from the inside and all that extra fabric was gonna be a bitch to deal with half blind inside of Rickles. Inch by inch, I would apply liquid stitch to both ends of the cone before stapling them together with an actual stapler internally. That way the staples would act as a clamp to assist the glue till it dried and it actually fucking worked. I know, I was kind of shocked myself. 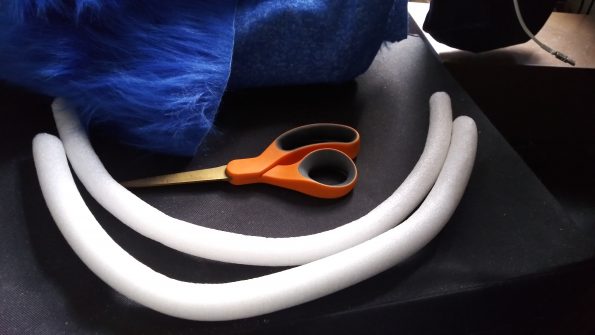 After all the pieces were combined I went to the box to grab the foam noodles I had been holding onto all this time for the arms. It had been almost a year and a half since I found them while rummaging through my closet, inspired by Jim Henson. What a different world it had become in that time. As I cut the arms to the desired length I thought about Jim’s funeral. About those who worked with him spent their moment of grieving performing with puppets on their arms because they knew that nothing would have made him happier than knowing that in the darkest of moments, creativity brought them out of it. 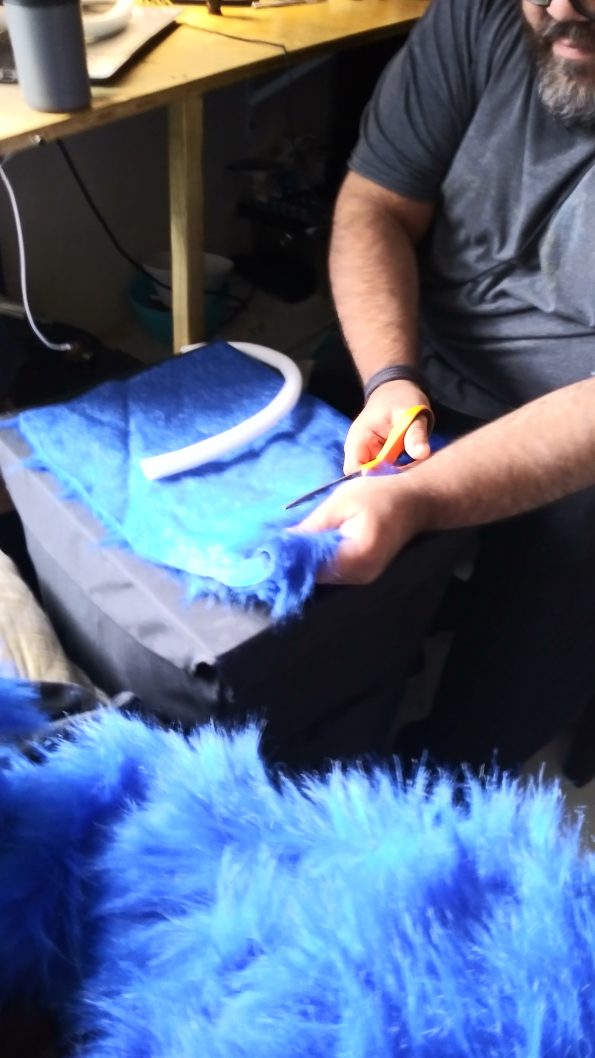 And it was with that in mind that I decided that creativity would win the day and went on to furrify, yeah I said it again, the arms. Now getting the fur around the arms was harder than you’d think. The faux fur was too stiff to turn inside out once glued so that was out of the question. I was gonna have to glue them together and staple them from the outside. 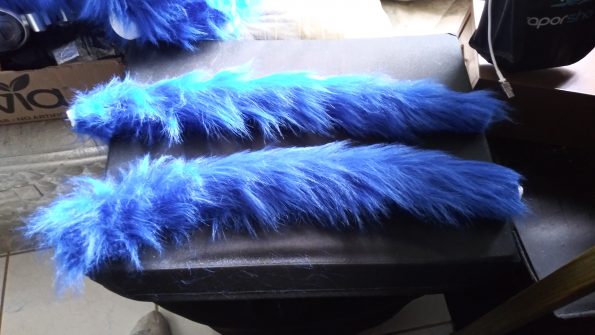 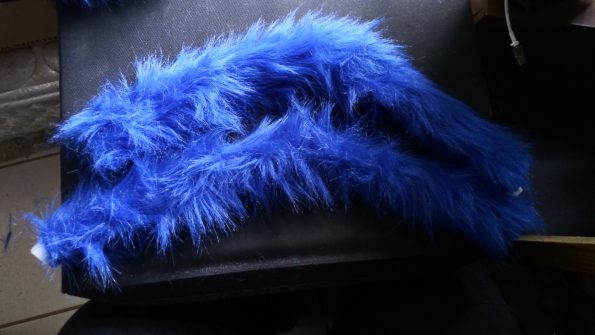 Luckily the fur does a lot to hide the seams which I figured would also come in handy when in the seams connecting them to the torso. I thought 5 or 6 inches below from where the neck starts would be a good spot to help create the illusion of shoulders. While cutting the holes where I would insert, glue and staple the arms I found myself being less precious about hiding the seems. 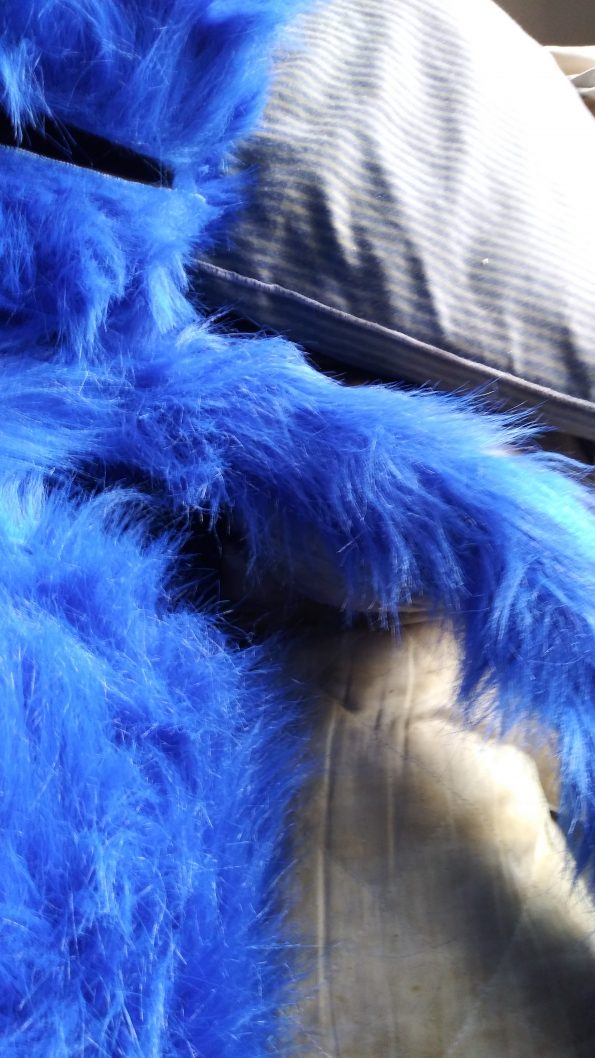 In fact the more I thought about it, the more I liked the idea of Rickles being a self aware puppet. A puppet that shows off his imperfections and openly talks about how he’s made of trash from a closet and held together with staples and glue. 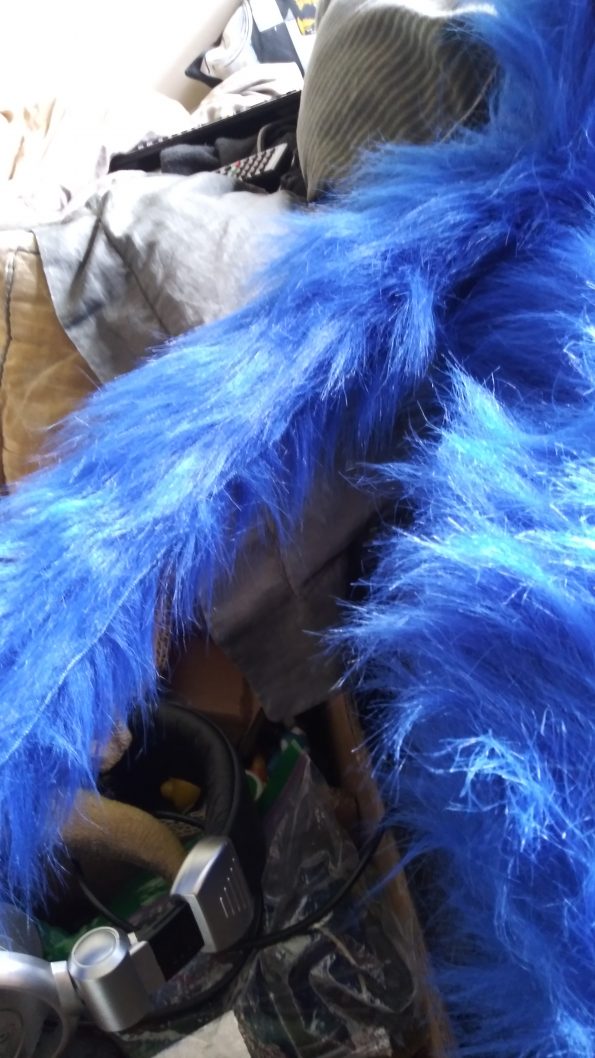 A puppet that proudly wears his snark on his sleeve while maintaining a gleam in his eyes. A puppet with a quickest of wits and even fouler mouth. 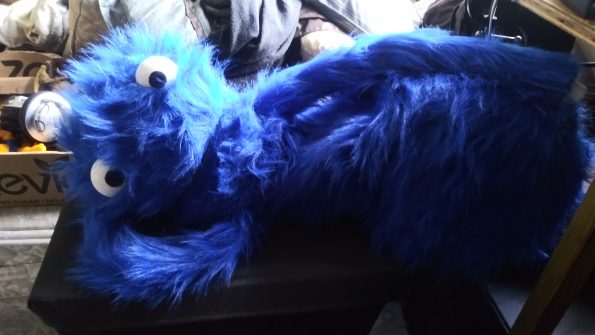 A puppet with the knowledge to question, the heart to overwhelm and the patience… to understand he’s gonna have to wait a longer for his hands. 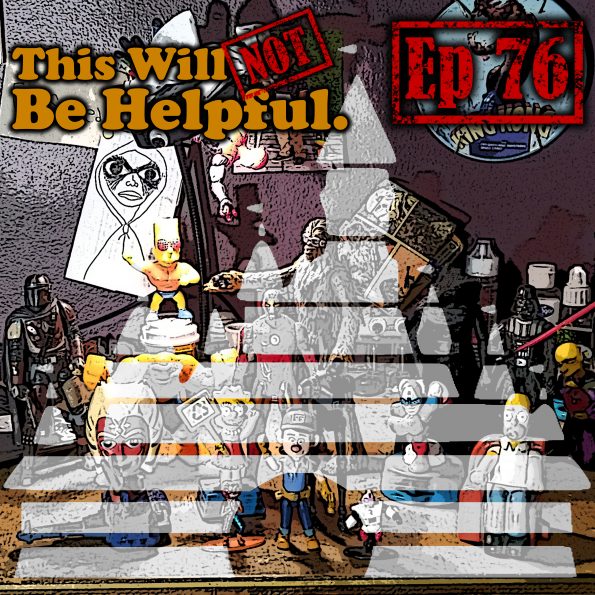 TOPIC – The Walt Disney Corporation (would Walt be proud?)

New to This WIll Not Be Helpful?

Podcast Synopsis: This Will Not Be Helpful is an informative podcast with very little information where hosts Erik Chavez and Victor Moran go over some of the week’s news, tackle a chosen topic in depth and answer YOUR sent in questions without the aid of google.

Have you heard our Clip Shows? 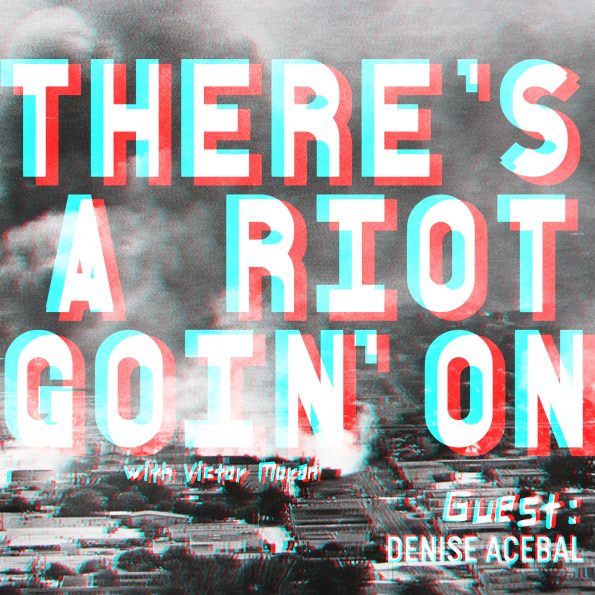 Episode Synopsis: I sit down for an enjoyable discussion with my ex wife and prior collaborator about the importance of fun and authenticity in art for both artist AND audience..

New to The riot?

Podcast Synopsis: Frequent but unscheduled, There’s a Riot Goin’ On is a series of conversations between Victor Moran, his friends, his family and his peers that range from the struggle of art to the joys of cooking.

Not a Premium Member? 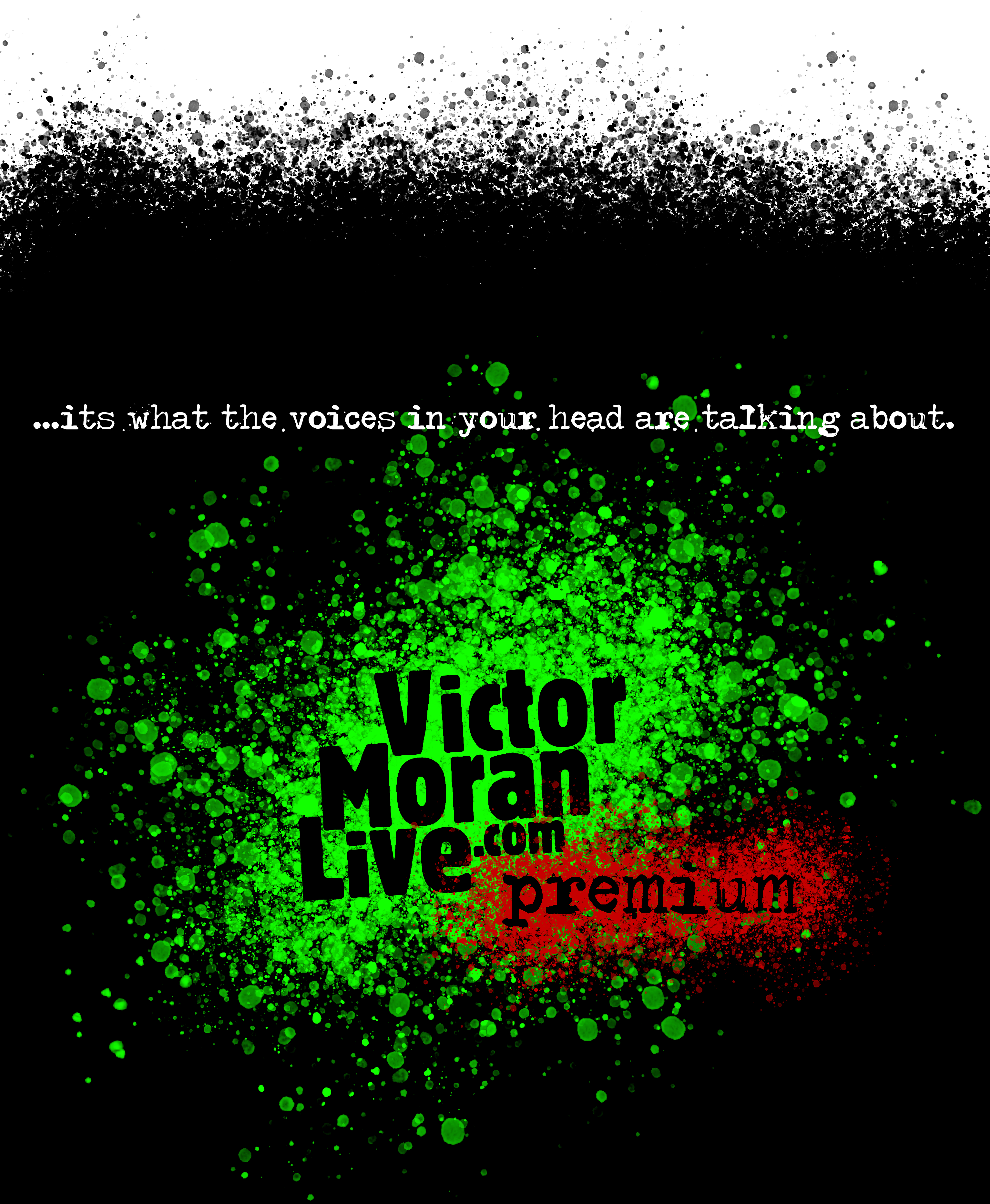